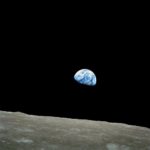 “Well, guys,” began Worden, who preferred to function in a casual collegial mode, “today we begin Phase One towards our ultimate goal, reaching the boundary to the dark side of the moon.”

The dark side of the moon was so called, not so much for the absence of sunlight where they planned to land, but because it was inaccessible to earthly communication and thereby free from recognition and scrutiny. Their mission to the surface of the moon required ultimate secrecy.

A controversy had long brewed in the military as to the need for manned space reconnaissance. The USAF had planned to develop a Manned Orbiting Laboratory (MOL) for this purpose, but the plan was scrubbed in 1969.By that time, the effectiveness of satellite reconnaissance had become clearly evident.

There remained an influential group of politicians and military officers who favored more extensive military involvement in space. To accomplish this, they argued, required the incorporation of manned missions. When,in 1970, the last three planned flights of Apollo were canceled on the grounds of budgetary cuts, the political bloc favoring military manned space missions won one trial exception, particularly since the three rockets had already been built and paid for.